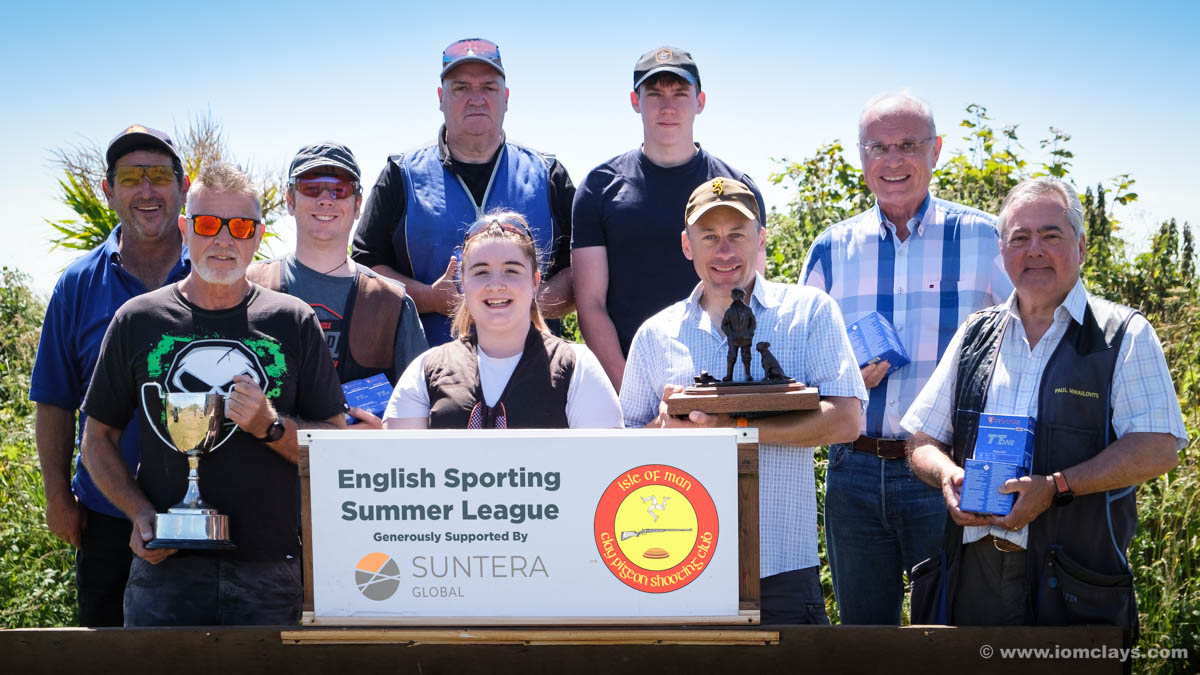 The fourth round of the Suntera Global Sporting League was held  at Meary Veg, Santon, with 21  competitors taking part in hot, dry sunny conditions, which also had the Ted Gohl High Gun and the Brian Faragher Handicap cups up for grabs.

The leader after the first stand was Mark Barnett with 9 points, in equal second place on 8 were Michael Cross, Peter Kelly and C class shooter Mark Sweetman. Barnett doubled his lead after stand two scoring 8 for a running total of 17, in second place was Michael Cross on 15 with Daddy Cross, Juan Cowley, Mark Sweetman and Rob Corlett in equal third place on 14. Barnett increased his lead once again after stand three scoring a maximum of 10 for a running total of 27, in second place now on 24 was Juan Cowley with Stan Cross now third on 23.

We still had Barnett in the lead after stand four on 35 points but it was Paul Mihailovits in second place now on 32 with Juan Cowley and Stan Cross equal third on 31. After the fifth and last stand we had Mark Barnett highgun and winner of the Ted Gohl Highgun trophy on 41 points but he almost let it slip away as he only scored 6 on the last stand to Stan Cross, Paul Mihailovits and Juan Cowley who all finished on 40 points.

In C Class Mark Sweetman was the winner with 37 points with Dave Morgan second on 30 followed by Allana Wade in third on 25 points. In B class Peter Kelly was third on 36 with Stan Cross taking second place on 40 with the highgun winner Mark Barnett in first place on 41. Michael Cross was third in A class on 39 points with Stan Cross and Paul Mihailovits tying for first place with 40 points.

In the handicap section we had a runway winner in Mark Sweetman who shot way above his handicap to take the cup with 61 points.

The joint leaders after the first 25 were Dave Corlett, Stan Cross, Michael Cross and Rob Corlett on 22 followed by Dave Lally on 21 with George Davies, Peter Kelly and John Moore next on 20.

In the handicap section, it was that man again Mark Sweetman who was leading the way on 30 points.

After the second round of 25 lady shooter Nicky Barnett and Wayne Barsby were in equal third place in C class with 19 points with another lady shooter Allana Wade second with 31 points but winning C class with 36 points was Mark Sweetman.

In B Class Steven Craine using a side by side was in  third place with 39 points with Rob Corlett taking second place on 43 points but winning B Class and winning the highgun cup with 45 points was Michael Cross.

Juan Cowley and Dave Lally were in equal third place in A class on 39 points with Dave Corlett taking second place on 41 with Paul Mihailovits A class winner with 42 points.

The day got even sweeter for Mark Sweetman as he picked up his second cup of the day taking the Meary Veg Handicap trophy with 60 points.