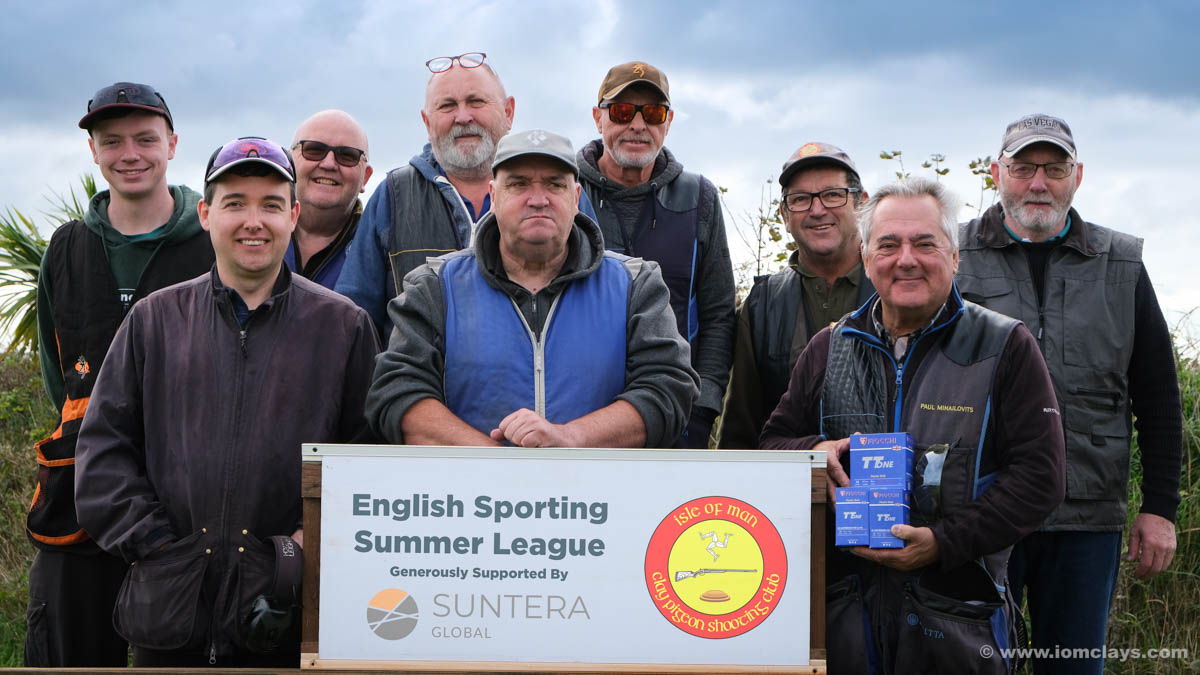 The sixth and final round of the Suntera Sporting League was held at Meary Veg, Santon, with 19 competitors taking part in cool but dry conditions.

After the fifth and last stand newcomer John Gaydon in his first sporting shoot finished with 18 points. In C class Mark Sweetman was third on 25 with Brian Kelly taking second place on 29 but winning with 31 points was Alan Wright. We had a tie for third place in B class between Will Rand and Peter Kelly on 37. We also had a tie for first place between Stan Cross and Rob Corlett on 40 points. In A class George Davies was third on 36 with junior David Cowin taking second place on 37 but winning A with 40 points was Paul Mihailovits.

In the afternoon the last round of the Pam and Dave Corlett Pro Sporting league was held again with 19 competitors taking part.

The leader after the first layout was Steven Craine with 23 points with Dave Corlett and Will Rand in equal second place on 22 followed by Rob Corlett on 20 with C class shooter Alan Wright next on 19.

After the second layout Brian Kelly was third in C class with 27 points with Mark Sweetman second on 29 but the winner of C class was Alan Wright making it a double C class win on the day with 31 points. In B Class we had a tie for second place between Steven Craine and Mark Barnett on 35 but taking B class with 36 points was Rob Corlett. Peter Kelly was third in A class on 37 with Will Rand taking second place on 38 but the clear winner with 43 points was Dave Corlett.

A big thank you must go to Brian, Mark and Will for setting up some very interesting targets for both disciplines on the day. Next week is the Trap Medley  sponsored by Creer and Kelly Ltd .