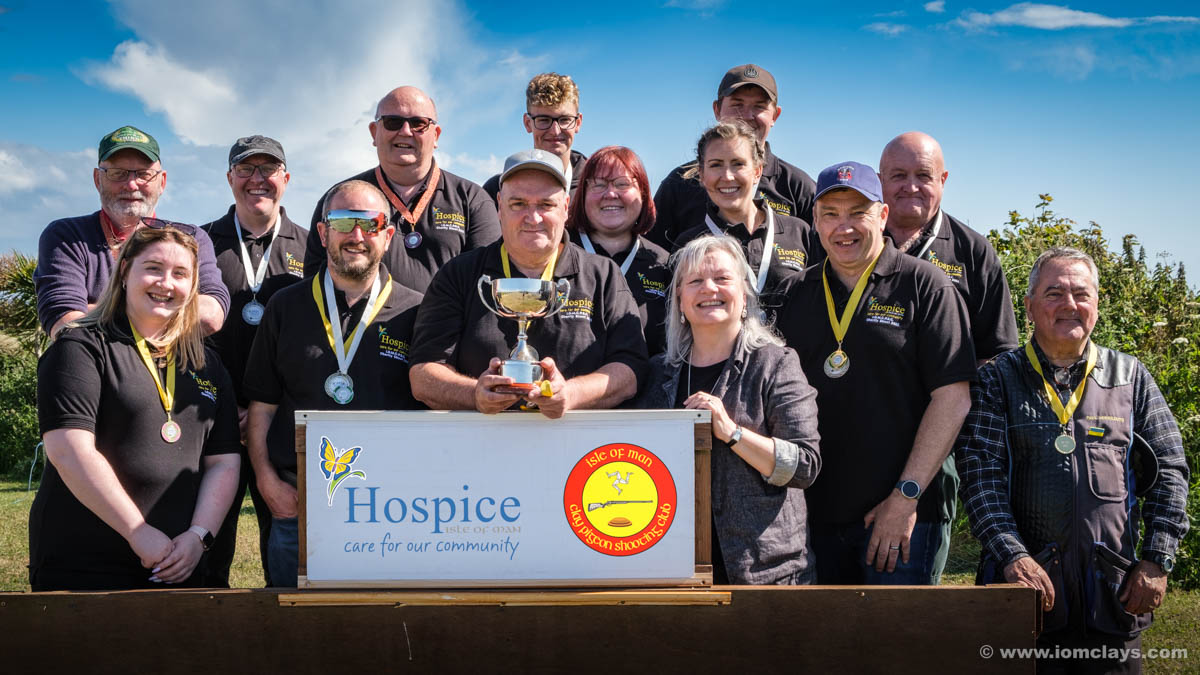 The annual Hospice Charity Shoot was once again hosted by The IOM Clay Pigeon Shooting Club at Meary Veg, Santon, with a full complement of 72  competitors taking part in dry, sunny but windy conditions.

The competitors shot in squads of six, with the first squad going out at 9am and the last squad starting at 2-30pm. Once all the squads had finished and the scores had been collated we had a tie for the Voirrey Kelly team cup between Top Spec Fencing and Hospice Allsorts both on 187 points so count back was required to find the gold medal winners who were Top Spec Fencing with team members Stan Cross, Michael Cross, Will Rand and Neil Parsons with a combined score of 187+42 to silver medal winners Hospice Allsorts 187+37.8 with team members Vanessa Smith, Chris Smith, Sarah Cubbon and Rob Watterson. Taking the bronze medals were team Hot Shot Glovers with 185 points with team members Jacob Glover, Logan Glover, Mark Riley and Maya Kewley.

In the individual section Neil Parsons was Highgun on 48 who was also the senior gold medallist with with Will Rand second on 46+10 and Mark Riley third on 46+8. Paul Mihailovits was first in the vets on 47 with Dave Corlett second on 44 and Alan wright third on 43. The first lady was Allana Wade on 40 with Rachael Bowen Matthews second on 35 and Shannon Roberts third on 26. The first junior was Joe Faragher on 39 with Zac Bellhouse second on 38 and Tom Bowman third on 32.

In the novice section David Collister took gold on 36 with James Murphy taking silver on 32 and Scott Glover taking bronze on 31. The handicap gold medallist was Tom Moore with 48+10.5, with Rob Watterson taking silver with 48+9.4. We had a 9 way tie for the bronze medal but Brian Kelly had the best count back score on 47+2.6 to take bronze.

The medals were presented by Vanessa Smith and Ann Mills of Hospice at the end of the day when it was announced that the club had raised over £2,500.00 for Hospice IOM which makes nearly thirty thousand pounds being raised over the last twelve years.

Also a big thank you to all other sponsors, all that helped in getting the range prepared for the event and to anybody else that helped in anyway in making it a good day out and finally may I thank all the competitors who took part without you it would not happen. Thank you all! 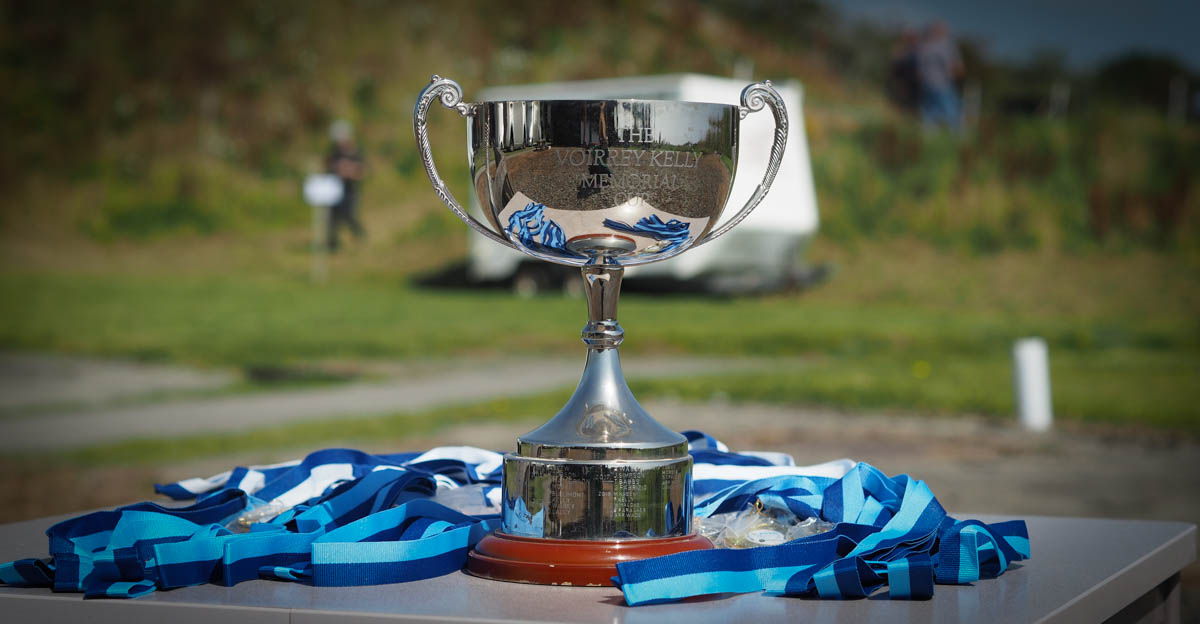 All entries are in and we’re able to confirm the squads for this Saturday’s annual Hospice charity shoot. Please check your times and arrive at least 20 minutes early to help us keep things smooth and promote this worthy cause. 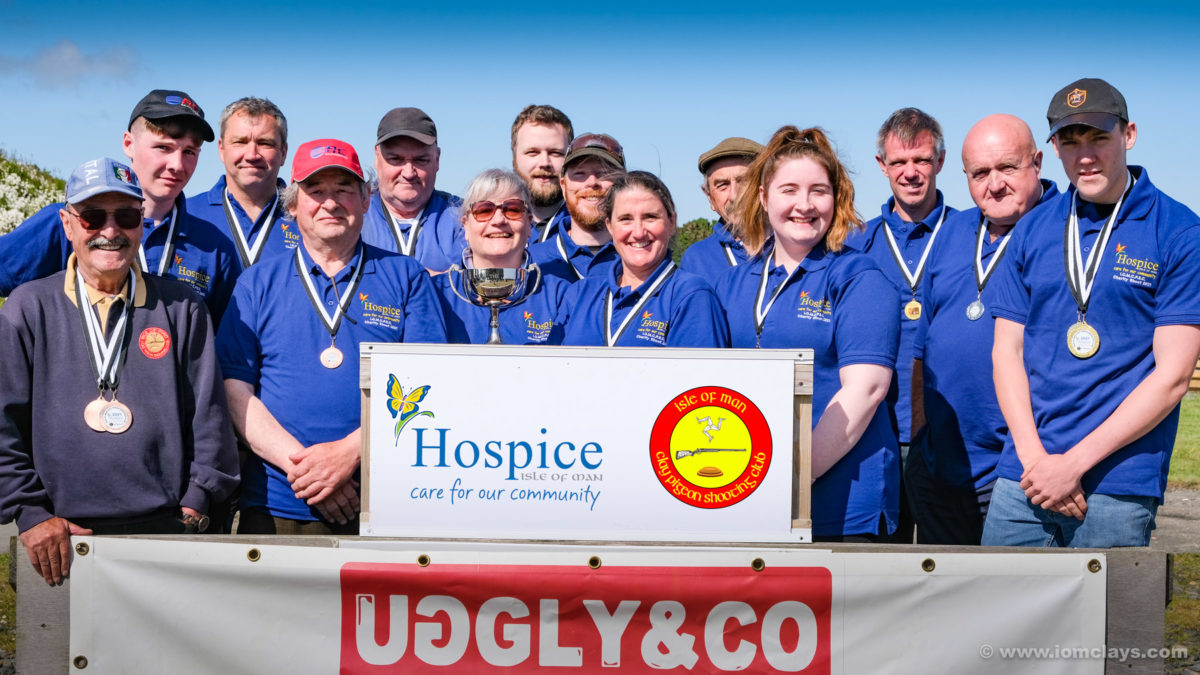 A full house of 72 competitors took to the stands on bright clear day at Meary Veg, Santon, for the IOM Clay Pigeon Shooting Club’s annual Hospice Charity Shoot which is now in its eleventh year and has raised over £25,000 to date.

This year’s shoot for the team event is handicapped based on the best three scores of the five stands shot. All class prizes are based on actual scores.

The first squad was out at 09:00 with Juan Cowley setting the pace for high gun with 45 points. In squad two we had a PB with James Davis former radio presenter beating his PB by one scoring eight points and with his handicap was in the lead for the handicap gold medal. Squad three saw two father and daughters teaming up to form a team in John and Darcy Bateson along with Mike and Kate Atkinson who set the score to beat in the team section with 186 points.

The 11:30 squad saw Rosalie and Richard Beaumont along with Tracey and Davy Jones taking to the stands with Davy claiming the high ground scoring 22. The 12:30 squad was entered from Hospice with Jamie Murphy, Liz Drummond, David Drummond and Callum Mills with Jamie being top dog with 32 points. The 1pm squad saw another two families taking part in the Kneen’s John, Richard and Kate along with the Fabrizio’s Peter and Giulio who would figure in the final results later on.

The 13:30 squad saw some big hitters taking part with Neil Parsons taking the lead in the high gun section with 46 pipping Juan Cowley’s score that had stood since 09:00 but it didn’t last long as junior Michael Cross who was in the same squad beat it with a score of 47. Also in this squad was Stuart Cilliers who was taking part for the first time and scored 17.

The 2pm squad was another entry from Hospice with juniors Charlie and William Muggan teaming up with Clare and Nick Kayzer finishing with a team total of 65.

The final squad at 2-30 was the Collister family Bill, John, David along with James Mylchreest with his Dad David taking part also for the first time. David finished with a combined score of 48 in the handicap section which tied for first place with James Davis and John Bateson so count back was needed to decide the medals with James taking the gold medal by just over a point with John taking the silver and David the bronze.

It was a close run thing in the team event once all the handicaps had been added in with the bronze medals going to David Mylchreest, Chris McCabe, Peter and Giulio Fabrizio with 185 points, taking the silver medals with 186 points were the two father and daughter pairings of Darcy and John Bateson along with Mike and Kate Atkinson. The winners of the gold medals were Stan and Michael Cross, Neil Parsons and Alan Kinrade with a score of 188.

At the conclusion of the event the medals were presented by Ann Mills CO of Hospice IOM.

I would like to thank are main sponsors, The NFU Mutual for sponsoring the medals, Harrison and Garrett for the burgers ribs etc Robinsons for the fruit and veg, British clay company for suppling the clays and last but not least Lisa and Kevin for putting on a marvellous buffet.

Also, a big thank you must go to all that helped in anyway in setting up, officiating, competing and most of all in making it a very enjoyable day.

With summer fast approaching we have opened registration for this year’s charity clay target event in aid of Hospice IOM. Once again we’re holding the event on a single day, with a number of start times set aside exclusively for novices.

Although it’s a team event we encourage single entrants as well as groups, and will be holding a draw on the day to make sure everyone belongs a team. This year’s entry charity donation is £35 and as always includes 50 targets, a full buffet, plus a limited edition commemorative polo shirt.

Places are starting to fill up already so head on over to iomclays.com/hospice and get yourselves registered!