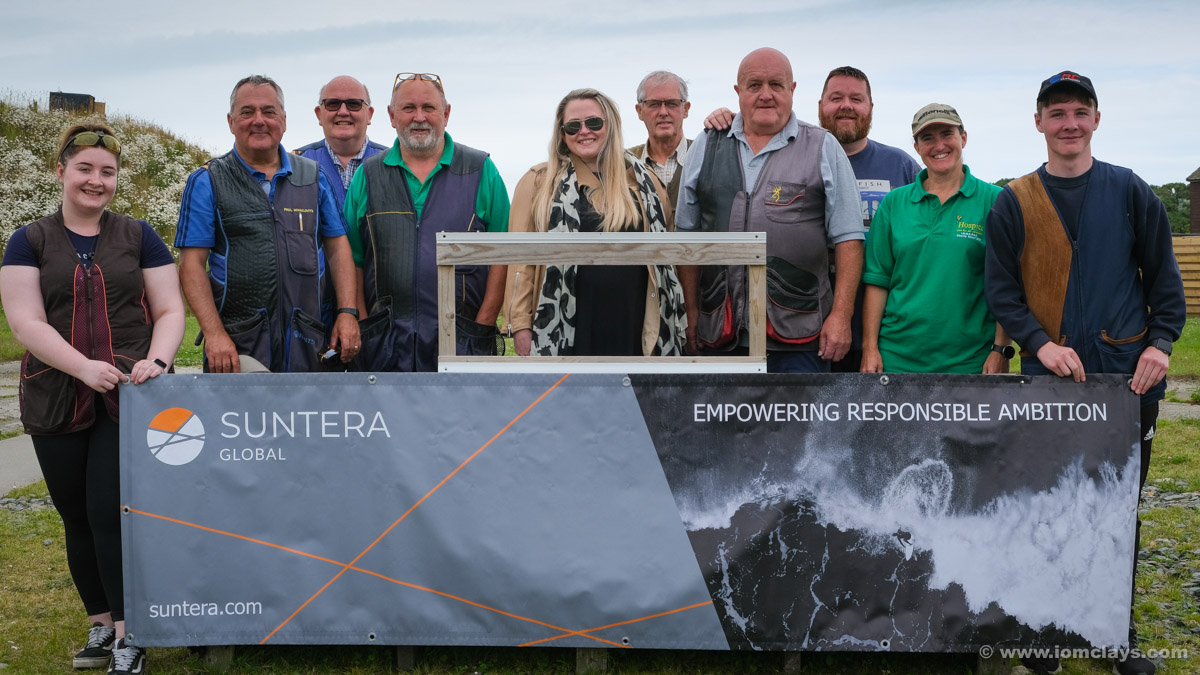 The third round of the Suntera Global Sporting League was held at Meary Veg, Santon, with 29 competitors taking part in near ideal conditions.

Stand one proved difficult with no one cleaning it and four shooters even on 6; Marty Kneen, Jack Clague, Dave Lally and Steven Craine. Marty Kneen was in the lead on his own after stand two on 16 with Rob Corlett next on 15 followed by eight shooters on 14. Kneen was still in the lead after stand three on 20 with Dave Corlett, Ben Richards and George Davies next on 18.

Kneen maintained his lead after stand four having a running total of 28 to Dave Corlett’s 26 in second place with Peter Kelly and George Davies tying for third place on 25. It was all change after stand 5 with Corlett taking the lead on 35 to Kneen’s 33 in second place with Paul Mihailovits now in third place on 32. After the sixth and final stand Dave Corlett was high gun and first in A class with 44 points, Kneen was second on 42 and Mihailovits third on 41.

In B Class junior Arran Wade was first on 40 with George Davies and Jack Clague in equal second place on 39. Lady shooter Nicky Barnett was the winner of C class with 33 points, followed by Alan Wright on 32 with juniors Allana Wade and David Cowin in equal third place on 29.

In the afternoon the third round of the Dave and Pam Corlett Pro Sporting League was held with 24 shooters taking part.

The leader after the first layout was that man again Dave Corlett with 24 points, in equal second place on 23 were Paul Mihailovits and unclassified Jack Kneen on 23  followed by Alan Wade and John Moore on 22 with Ben Richards, Rob Corlett and Jack Clague on 21. After the second layout was shot Ben Richards was the overall winner and A class winner  hitting 23 for a winning total of 44, in second place on 43 was Alan wade with Marty Kneen third on 40, Jack Kneen who was unclassified beat his Dad Marty scoring 42 points – one more shoot Jack and you will get a classification.

In B class Paul Mihailovits was the winner on 43 with Brian Faragher second on 41 and Rob Corlett third on 39. Nicky Barnett was once again C Class winner on 28 points with Allana Wade and Alan Wright in equal second place on 25.